・ The figures are cumulative from FY2006, and the upper row shows the targets for FY2020. The bottom row is the results for FY2017 Shows.

Shin-Tomei Expressway-Shin-Meishin Expressway, such as Expressway network and smart Inter
We will steadily and efficiently develop changes to meet local expectations. 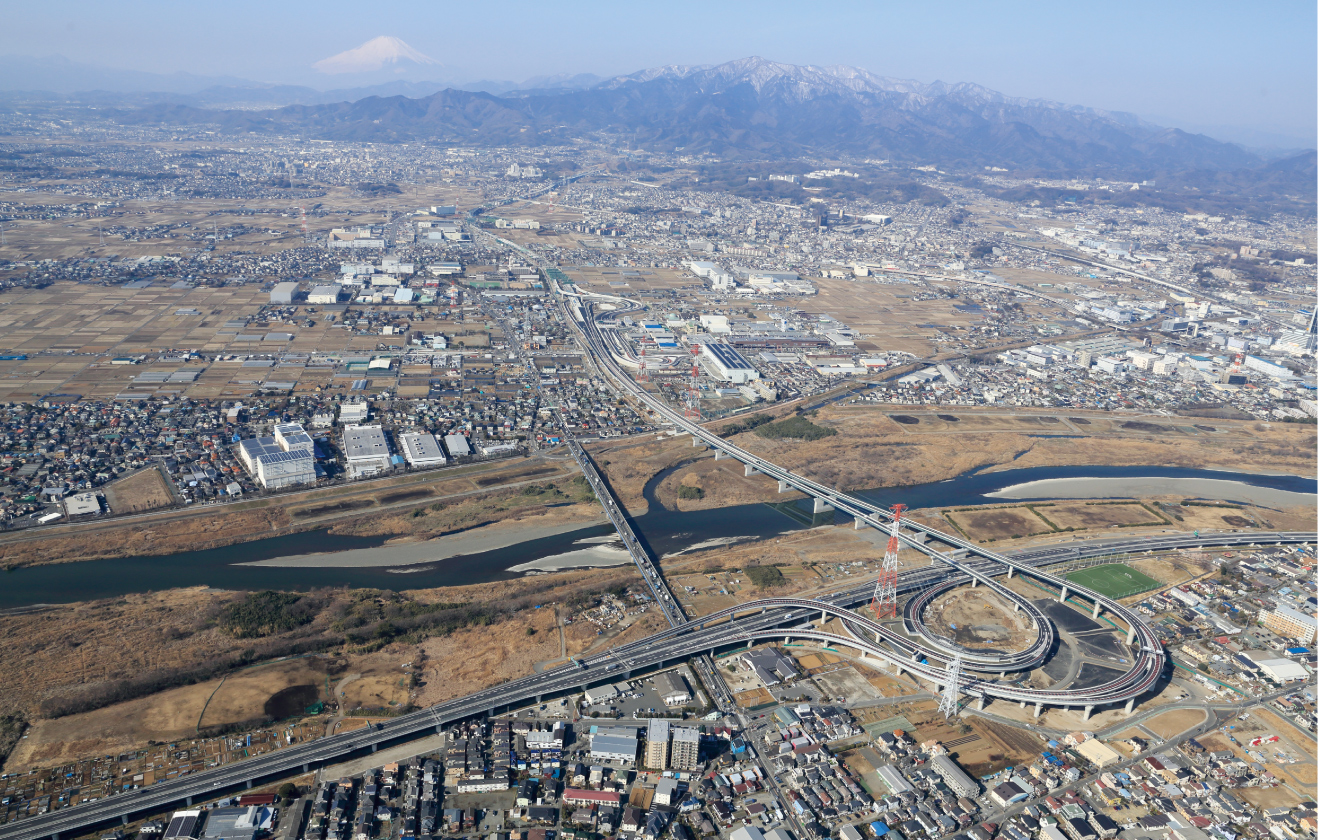 In fiscal 2017, we established 6 km of smart interchanges for 5 km. 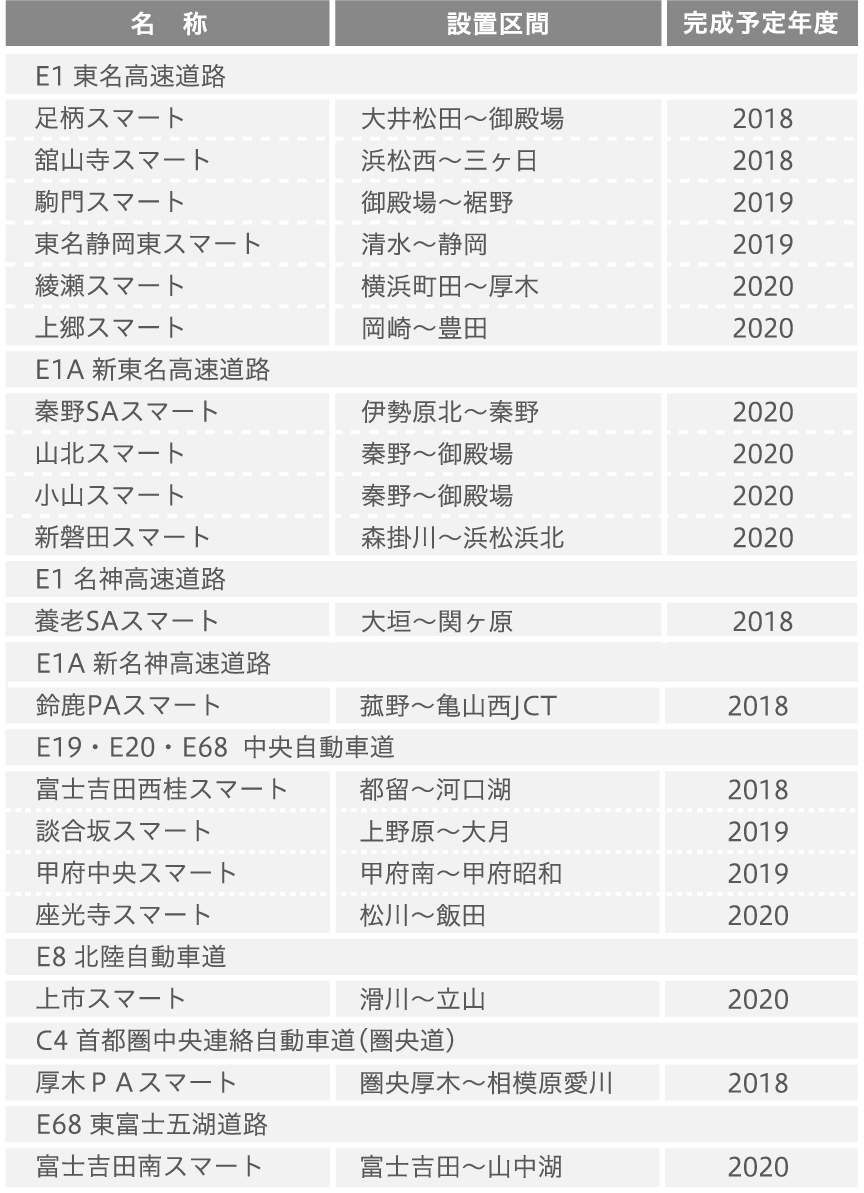 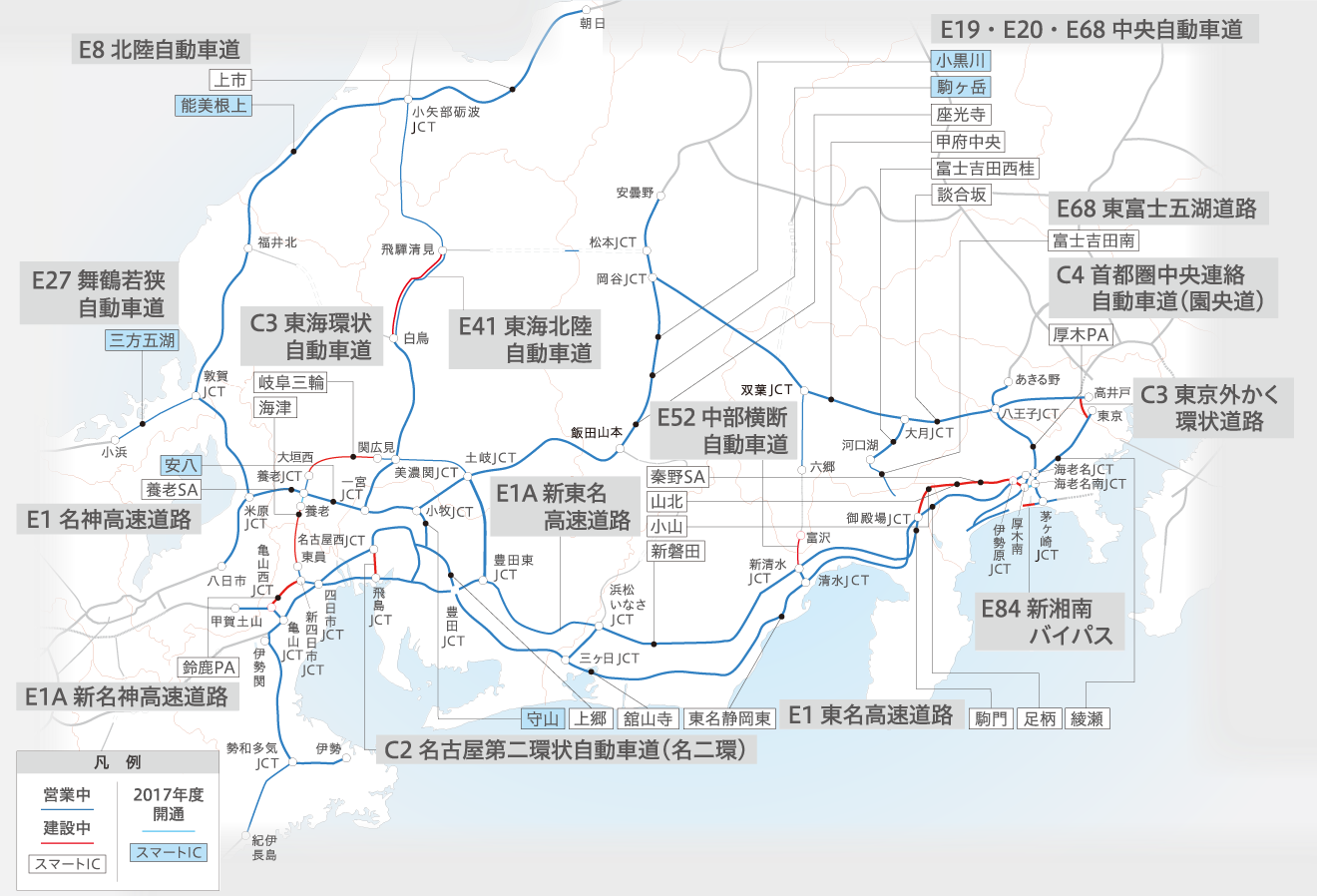 Expressway In addition to shortening the required time, the opening of will bring various stock effects such as improving productivity of economic activities, revitalizing the region, contributing to early restoration in the event of a large-scale disaster, and promoting tourism.

Shin-Tomei Expwy(Shin-Tomei Expressway) Congestion loss time due to opening between Gotemba JCT and Toyota-higashi JCT * 1 Is reduced by about 90%, required time * 2 Is reduced by about 22 minutes, contributing to improved punctuality (time reliability), more efficient logistics, and associated productivity.
The opening of the section under construction is expected to further reduce traffic congestion and shorten the required time. 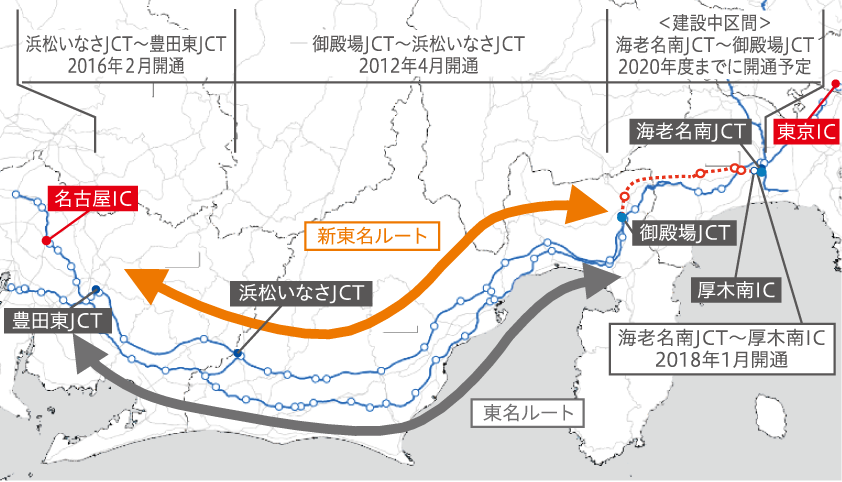 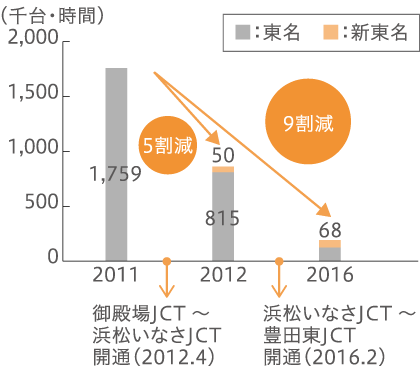 Changes in time required from Gotemba JCT to Toyota JCT

Expressway Revitalization of the local economy through maintenance

20-Year Economic Ripple Effect of Improvement of Isewangan Expwy(Isewangan Expressway) * 3 Is worth about 12 trillion yen in Aichi and Mie prefectures, and is worthy of raising the economy of both prefectures by about 1.4%. 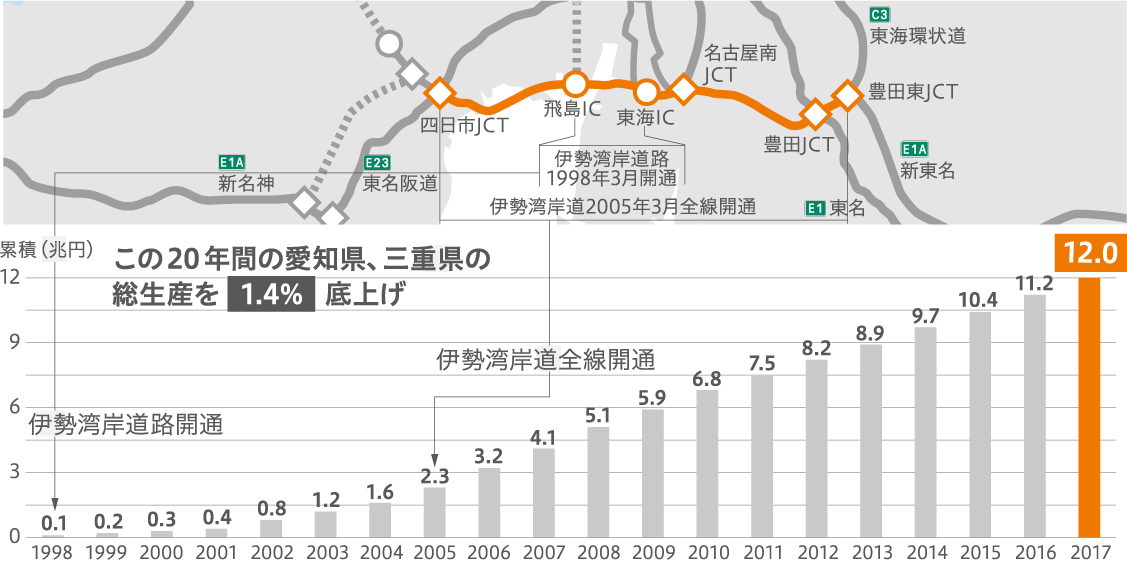 Extension of the Shin-Meishin Expwy(Shin-Meishin Expressway)Shin-Yokkaichi JCT to Kameyama-nishi JCT to form a double network with the Higashi-Meihan Expwy. Redundancy * 4 By using rest facilities, we will support rescue and rescue activities in the event of a disaster, and support early recovery.

* 4 English for “redundancy” and “surplus”. In the national land plan, when a failure occurs due to a natural disaster, the disruption of some sections or the destruction of some facilities will not lead to the overall malfunction. In addition, it shows the nature that the transportation network and lifeline facilities are multiplexed in advance and spare means are prepared.

Shin-Meishin Expressway, which passes inland and is not easily affected by huge earthquakes 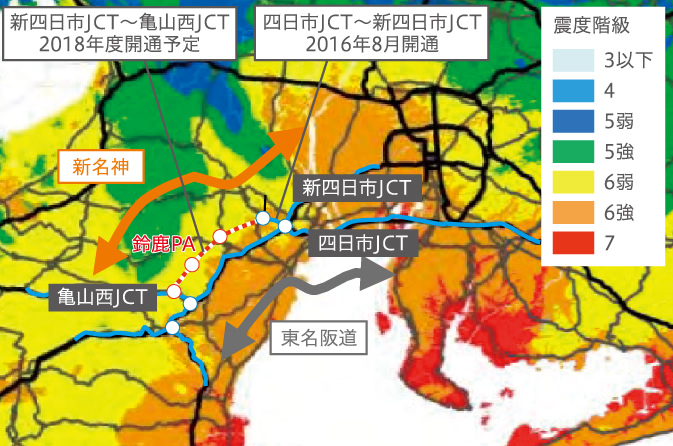 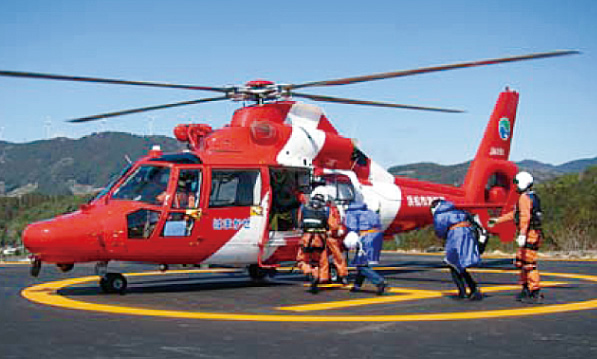 Maintenance is also planned for the Shin-Meishin Expressway Suzuka PA under construction.

One-day sightseeing area with full opening of Chubu-OdanExpwy(Chubu Odan Expressway) * 5 Of Large and, due to an increase in tourist arrivals Nyukomi, Yamanashi Prefecture, activation of the wayside region of Shizuoka Prefecture, is expected.

* 5 The range that can be reached within 3 hours to the destination is defined as a day trip area. 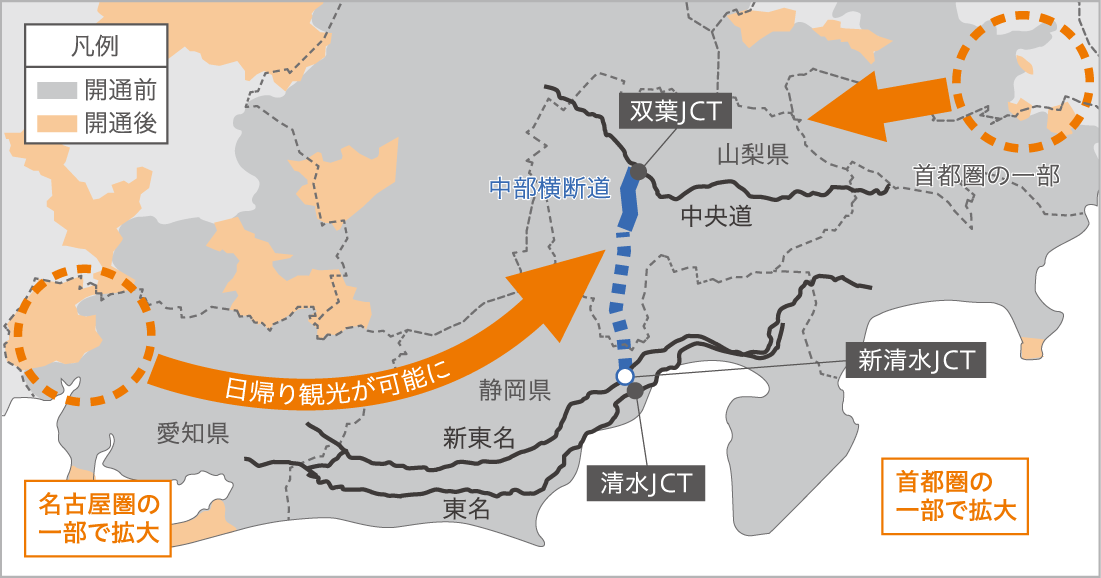