We prioritize safety over everything, and are safe and comfortable Expressway By providing space, customers can trust Expressway We will strive to enhance the maintenance and service of the company. I want customers to feel that they want to run today and tomorrow. To that end, we believe it is important to realize a service that is more visible than ever, and above all, that customers can feel.

Inspection of road structures is the basis for early detection of changes in road structures, etc., taking prompt and appropriate measures, and maintaining good conditions over the long term.
In addition to checking the state of road structures through daily patrols, detailed inspections of structures such as bridges and tunnels are conducted once every five years based on laws and regulations.
For structures that have been confirmed to have been damaged by inspection, a repair plan will be formulated and repairs will be performed at an early stage.
In addition, we will actively adopt new inspection technologies in order to accurately grasp the state of structures that are difficult to inspect, such as bridges in confined spaces.

Renewal and repair of road structures

Replace reinforced concrete slabs with more durable prestressed concrete slabs. By changing one side at a time according to face-to-face traffic regulation, the impact on traffic due to construction is reduced.

Securing emergency transportation routes in the event of a disaster

In response to the partial revision of the Disaster Countermeasures Basic Act, we are strengthening measures to move abandoned vehicles and stuck vehicles that would impede the passage of emergency vehicles in the event of a large-scale earthquake or heavy snow.

During the heavy snowfall in Gifu Prefecture in December 2014 Expressway By applying 71 vehicles for the first time and moving 71 stuck vehicles, we tried to secure early traffic routes and support emergency rescue vehicles. 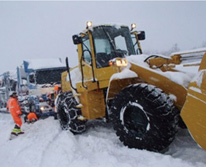 In response to the record heavy snowfall in the Kanto and Koshin regions in February 2014, expansion of advance public relations recommending withdrawal, Safety on the Expressway Enhancing awareness-raising activities, strengthening pre-placement of snow removal vehicles, increasing the number of rotary snow removal vehicles, strengthening the snow removal system, such as efficient operation through the introduction of a location information system, and strengthening cooperation with related organizations. We strive to ensure smooth traffic during stormy weather.

Regarding anti-seismic reinforcement plans for bridges

The number of fatal accidents in 2014 is slightly decreasing compared to the previous year, but there are many “anti-stop vehicles” and “person-to-person” accidents. `` Hardware measures '' that lead to reduction of serious traffic accidents and improvement of driving environment such as high-intensity lane marks, traffic safety campaigns and Expressway Holding a road safety seminar, Safety on the Expressway We are developing “soft measures”, which are safety awareness activities, such as providing traffic congestion prediction guides.

In addition, in the Tajimi area of the ChuoExpwy, a trial run of lane operation to switch from a climbing lane to a driving lane was conducted to reduce the risk of traffic accidents and increase traffic capacity.

Changes in fatal accidents over time

As a measure against unauthorized traffic such as forced breakthroughs and ETC non-charged vehicles, an additional bar and surveillance camera were added to the toll gate, and vehicles were identified through video confirmation and data survey analysis, etc. We are striving to collect.

For addicts and malicious persons, we will face a strong stance such as payment claim lawsuits, police reports and investigation cooperation.

In addition, we are working to ensure the recovery of causal contributions that require the cause of the accident to pay for the road restoration after the accident.

Promotion of ETC2.0 service-New fee policy for "use wisely"

"ETC2.0"Expressway In addition to paying tolls, we provide driving assistance services that are beneficial to drivers, such as avoiding traffic jams and driving safety.
We are aiming to improve road management and traffic jam information using the ETC 2.0 service, and we are developing safe driving support technologies and studying policy fees for mitigating congestion in cooperation with related organizations. The
We will also work with related organizations to support the spread of ETC2.0 on-board devices.