Fire occurs in the tunnel!

If a fire breaks out in the tunnel

If you find a fire in the tunnel, please report it using a reporting device or an emergency telephone, and extinguish the fire as soon as possible.

In the tunnel, Push-button notification device (every 50m), emergency call (every 200m) Is installed. The push button type alarm device will automatically report a fire when pressed until the lamp is turned on. 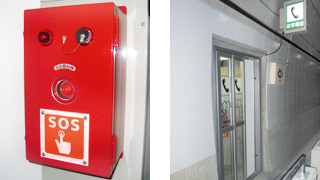 (2) Try to extinguish the fire with a fire extinguisher.

(4) If the fire Large and becomes uncontrollable, evacuate immediately.

Information and instructions will be flown through the speakers and radio rebroadcasts in the tunnel, so please stay calm and act accordingly. Also, the smoke drops when the temperature drops. Check the direction of the emergency exit by watching the flow of smoke so that it is not covered by smoke.

Evacuation method in case of vehicle fire in tunnel (video)

This video will show you how to evacuate when you encounter a vehicle fire in a tunnel.

We may move abandoned vehicles to ensure that emergency vehicles pass.

When leaving your car to evacuate in case of a disaster, move the car to the left, set the handbrake, stop the engine and lock the key, and do not lock the door.

In the event of partial amendment of the Basic Law on Disaster Countermeasures that was enforced on November 21, 2014, if a large-scale disaster such as an earthquake directly under the Tokyo Metropolitan Area or heavy snowfall would hinder the passage of emergency traffic vehicles, abandoned vehicles and stuck vehicles will be Road managers can now take actions such as moving.

Introducing how to deal with vehicle fires in tunnels with videos.